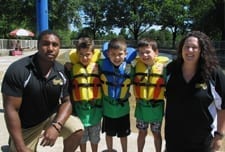 An anonymous donor allows Sun Youth the purchase of life jackets for its Day Camp children.

Sun Youth is proud to announce that one of its donors, the one known to the public as “Bike Man”, just contributed a large sum to allow the organization to purchase life jackets for children 5 to 8 years of age attending its day camp. This initiative comes after the incident that nearly cost the life of a 5 year-old boy at the Parc Jean-Drapeau beach last week.

Parents will be pleased to learn that, after the end of Sun Youth Day Camp on August 17th, their children will get to keep the life jackets and use them in all their water activities. With the support of this anonymous donor, this distribution of life jackets will become an annual event, such as it is the case for distribution of new bikes that the organization holds each year thanks to the contribution of Bike Man. Children’s safety is crucial to the organization and its donor which is why safety helmets are provided along with the bikes. In addition, as of next summer, Sun Youth will offer swimming lessons taught by professionals to children 8 years and under attending its day camp.

Through these initiatives, Sun Youth hopes other day camps will follow in its steps and implement similar projects, thereby reducing the number of child drowning incidents during the summer.