Sun Youth had the pleasure of adding another Hornets alumni to the Wall of Fame.

Q: Can you briefly describe your playing career with the Sun Youth Hornets?

A: From high school, I went to Mariannopolis, which had no football team. After doing my homework on what team I could play for, I reached out to Earl De La Perralle and came out for the team. I lived in Montreal West, so I had long days, and I had two nagging ankle injuries (I initially sprained them in the same game), but we had some great wins and great games. We almost beat North Shore (that’s when I sprained both ankles), and met some great guys—I didn’t know anyone at the first practice.

Q: Can you briefly describe the process of attaining a scholarship and why you chose the US Naval Academy?

A: To be selected to a US service academy, you need a political appointment from a Senator or Congressman. Because I was born to American parents and raised in Montreal, I had no politician that represented me, so the Naval Academy suggested I go through my parents’ home of record, Wisconsin.  The staffers that I met with in Milwaukee liked my resume, but were candid and told me that because I didn’t live in Wisconsin, the Senator could not nominate me. It looked bad. But, they also suggested that I try for an athletic scholarship. I sent the Air Force Academy and Naval Academy highlights from my junior games with Hochelaga that were aired on TV with Serge Vleminyx doing play-by-play. The Air Force never answered. The Naval Academy got me in. Years later, I spoke with one of the Naval Academy coaches and found out that the coaches, who spoke no French, loved Serge so much that they got me in.

Q: Did you experience a culture shock coming from Montreal?

A: Not really! My parents were American, and I spent pretty much every summer of my life in Wisconsin. The football was a culture shock. The Naval Academy had three practice fields, the home field was incredible, every coach chewed tobacco, the depth charts were something like 8 players deep, the size and speed of the players was incredible. It was an attention grabber!

A: I had the misfortune of tearing my ACL during sophomore spring ball, so I missed my entire junior year (Navy does not redshirt). Not a good situation. I became a role player, and did what I was asked.  Whether it was taking snaps with the #1 teams or scout team, I did my job. It allowed me to mentor the young players, which I really enjoyed. Beating Army my senior year going into the game 0-3 was huge.  Playing West Point (Army) is Montreal v. Toronto times 1,000. I’m proudest of coming back from full knee reconstruction to letter my senior year.

Q: Can you briefly describe your career in the US Navy & why you decided to become a pilot?

A: Top Gun came out my plebe summer, i.e., the summer before my freshman year). Everyone wanted to fly F-14 Tom Cats. I actually started to gravitate to the SEALS, but after doing some of the training, I was told that I couldn’t go on because of my eye sight.  Moreover, that meant I could not be a pilot, BUT I could be a Naval Flight Officer, i.e., the backseater, or Goose from Top Gun. I started out in jets but I used to puke my guts out when we would dog fight. I never quit, but my Commanding Officer gave me an ultimatum on my last flight of not puking, in which case I can continue my training in jets, or if I did throw up to go props (propellers) or Supply Corps. I completed that flight with above average grades, but I filled up a puke bag (those were very tough flights), so I ended up in props (a more stable platform with less “G’s” acting on the body). The Navy took me to well over 50 countries and several different missions. I don’t know if I would change anything.

Q: How did football help you with your career with in the US Navy?

A: Football was a lab in perseverance. I had 50 or so classmates on the football team as plebes (freshmen). We ended our senior year with 15. With a full academic load every year—at an engineering school—it was easy to quit. Football went from mid-August to early December. We practiced on turf a lot, and we’re talking the old hard stuff. Turf burns and shin splints were very common. To top it off, I had knee surgery. But nothing was going to stop me from what I started with respect to football. Football got me in, and I owed it my perseverance. This experience would help me with flight school and law school.

Q: When did you decide that you wanted to pursue a career as a lawyer?

A: When I was about to join my first squadron in Hawaii, I reached out to them about what my collateral duty would be, essentially my job when I wasn’t flying. They asked if I wanted to be a Legal Officer, a very common job for a junior officer. I asked what it entailed, and the first answer was a 30-day school in San Diego. I stopped the conversation in mid-sentence, and said I wanted it. I was in San Jose at the time for training. At my next squadron, I was the legal officer there too. When I left Hawaii, I had been accepted to several law programs, so for my set of orders I taught leadership for the Navy during the day and then went to law school at night for 4 days a week—I doubt I would do that again, that was tough. A 40+ hour work week combined with 10 hours of law classes every week. Studying was easily 20-30 hours.

Q: Can you talk a little bit about your career as high school football coach and one or two things that you teach or emphasize with your players?

A: I’ve been coaching for two years, and I really just fell into it.  I coach at the high school my wife went to, and one 4th of July party a basketball coach from the school was invited by my wife. We started talking about sports, football, coaching and then I dove into my Coach Bellichek stories. Not Bill Bellichek, but Steve Bellichek, his father. Steve Bellichek coached at Navy for 40 some years and he was there when I played. Incredible guy with funny stories. The basketball coach said I should coach at this high school, and the rest is history as they say. I coach special teams and I emphasize (1) football prepares you for life, and (2) the cerebral aspects of football. Despite the stereotype of a dumb jock, football is an incredible thinking game. For example, in the huddle a player receives the play, he then goes to his position in the formation, he needs to read the defense and adjust the play, he needs to listen to the quarterback for an audible and then adjust, at the snap, he needs to execute the play while continuously reading the defense, and finally he has to remember what just happened so he can apply it to future plays.  All in a couple of seconds.  My favourite saying to them is “Adapt and overcome.”

Q: Lastly what advice would you give to a Canadian athlete trying to gain a NCAA scholarship?

A: Recruiting has changed so much. American schools are looking North for players, which is great.  College coaches love metrics, not so much game metrics but more physical ones, i.e., your weight, your 40 time, your bench, etc. I would say work on those. Next, you have to market yourself. If your coach has a connection great, use it. But if he doesn’t, MAKE connections. Go to football camps in the US. Study the Hudl videos on what goes in a great highlight reel. You have to SELL yourself. Good salesman don’t take “no” for an answer. Keep that in mind! The SEALS have a saying that luck equals preparation meeting opportunity. Be prepared and try to create your opportunities! Also, do not compromise academics, and do not wear blinders on where you want to play—have an open mind.

Sun Youth had the pleasure of adding another Hornets alumni on our Wall of Fame, CDR Eric Pihl. He played football for us in the mid 80’s and he later attained a NCAA Division 1 scholarship from the United States Naval Academy as a Quarterback. After college CDR Pihl joined the U.S. Navy as a pilot and has had a wonderful 26 year long career. Today he continues to serve as a reserve in the Navy and is a practicing lawyer in California.

During his visit, Eric Pihl was happy to share with us what he learned at Sun Youth and how it helped him to prepare for his career in the US Navy. 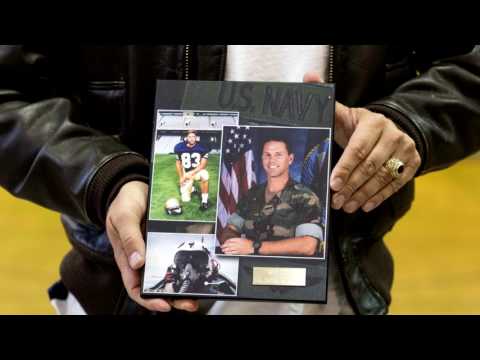