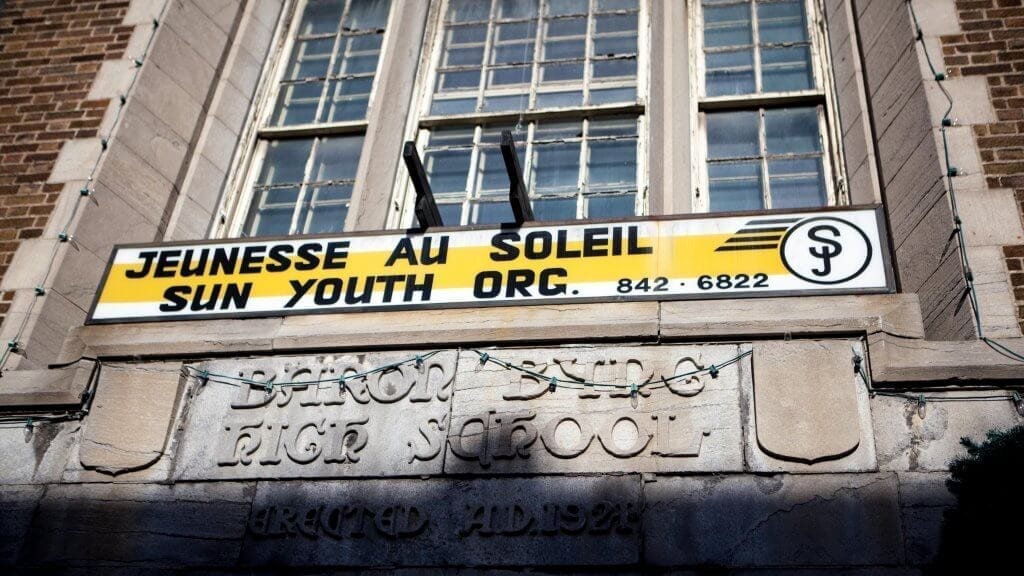 As of the 9th of November, 2018, Sun Youth will be offering its services in new buildings.

From the beginning of Sun Youth’s history in 1954, our organization has been well rooted in the community. The Clark Street Sun handwritten newspaper was first created in the kitchen of Sid Stevens’ parents on St-Cuthbert Street and served as a means to raise funds to organize activities for the underprivileged kids in the neighborhood.

Shortly after, a local shoemaker (Weiner Shoe Shop) agreed to lend them a section of his St. Cuthbert back store for free so they could work on the production of their weekly newspaper. From 1967 to 1981, the youngsters moved their headquarters into a small building at the foot of Mount Royal (commonly known as the White House) thanks to then-Mayor of Montreal Jean Drapeau. In 1981 our organization moved to its current St. Urbain Street headquarters, the former Baron-Byng High-School. Nearly four decades later and following last year’s decision of the Montreal School board to take back Baron Byng and transform it into a school again, we have decided to take our future into our own hands and work towards getting a building of our own that will suit the needs of our community.

As of the 9th of November, 2018, a new chapter will begin for Sun Youth Organization. Although we haven’t found our final destination yet and still want it to be on the Plateau Mont-Royal, we have found a very suitable solution for the mid-term. Thanks to the City of Montreal, our head office and sports and recreation programs will be going back to the little White House on the corner of Mont-Royal and Park Avenue. Meanwhile, we will be opening a service center at 6700, Park Avenue (between Beaubien and Beaumont) where people will be able to have access to the same services they had at Baron Byng: our food bank, clothing bank, access to medication, fire and crime victims services, financial help for family with sick children and much more. The building will be fully wheelchair accessible and all services will be offered on one floor.

We would like to thank the City of Montreal for its tremendous support through our history and its renewed confidence shown towards our organization, the City having recently concluded a financial agreement with our organization to support us in this new venture for the next four years. We would also like to thank the Montreal community for its support and generosity; we will need its support like never before. Although necessary, the move will be very taxing on our resources and we will need all the help we can get to make sure we pursue our mission of helping the community be a better place for thousands of Montrealers.

We wish to reassure our beneficiaries and our donors that the quality of our services will not be affected and that we are currently doing everything possible to ensure the continuity of these services, which so many people depend on, and in most cases, improve them. Our new Park Avenue building is even more accessible to people by public transit, from the Green, Blue and Orange metro lines, in addition to the commuter train at the Parc station. Unlike our current location, the place offers more parking space for people who need help and those who want to give us theirs. Those who wish to support us by donating material will be able to do so by using the donation bins identified with our colors which will be placed in several locations in the city. The accessibility to the White House will remain the same as currently, which will be a stone’s throw away from the football field where our Hornets teams practice and play.

For Sun Youth, it is definitely a step forward, while representing a return to our roots! Since 1981 we have learned a lot inside the old school walls of Baron-Byng and have built precious memories. The history of our organization, although many of its chapters were written in them, is much more than about buildings. It is that of the men and women, and of course the children, who built it. No matter where we are, this story will always follow us.