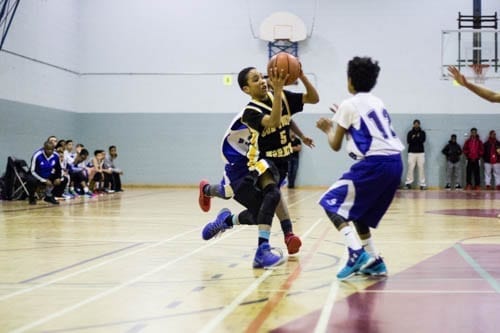 The Montreal Basketball League held its “final four” tournament in honor of the famous NCAA competition.

Every year on the third weekend of March, the Montreal Basketball League holds its own “final four” tournament in honor of the famous NCAA competition. The tournament, which is open to all age groups represented in the league, is always a fast-paced thriller and this year was no different.

Sun Youth was well represented as three of their AAA boys’ teams from the Novice, Mini, and Bantam divisions all made it to the semi-finals. Their Midget and Juvenile’s AAA teams had previously lost in quarter finals respectively to the Brookwood Bullets and the Park Ex Knights and their Juvenile girls’ teams also suffered a crushing loss on March 17th to the Longueuil Tornadoes. Unfortunately, the semi-finals is where it ended for the Bantams as they lost a heartbreaker in overtime to Brookwood, who then breezed by the Park Ex Knights in the finals.

Although the loss was extremely disappointing, the weekend was ultimately salvaged the next day as both the Novice and the Mini teams won their respective championships. For the Novices this was their second consecutive championship, beating Île Perrot in the finals. For the Minis it was time for revenge as they faced off against cross-town rivals, the Dawson Community Blues, a team who had beaten them both times in league play this season. One Hornet in particular, Isaiah King, led his team to victory with his 25 points. His athleticism was too much for his opponents, creating countless opportunities to score by having turnover after turnover. The future of Sun Youth’s basketball program looks extremely bright as the youngest three age groups represented by the Hornets all distinguished themselves brilliantly when the stakes were at their highest.

This weekend concluded a wonderful winter season for the Sun Youth Hornets basketball program. The Hornets now begin to prepare for their summer season where kids will be given the chance to showcase their talents to NCAA Division I coaches in tournaments all across the United States.