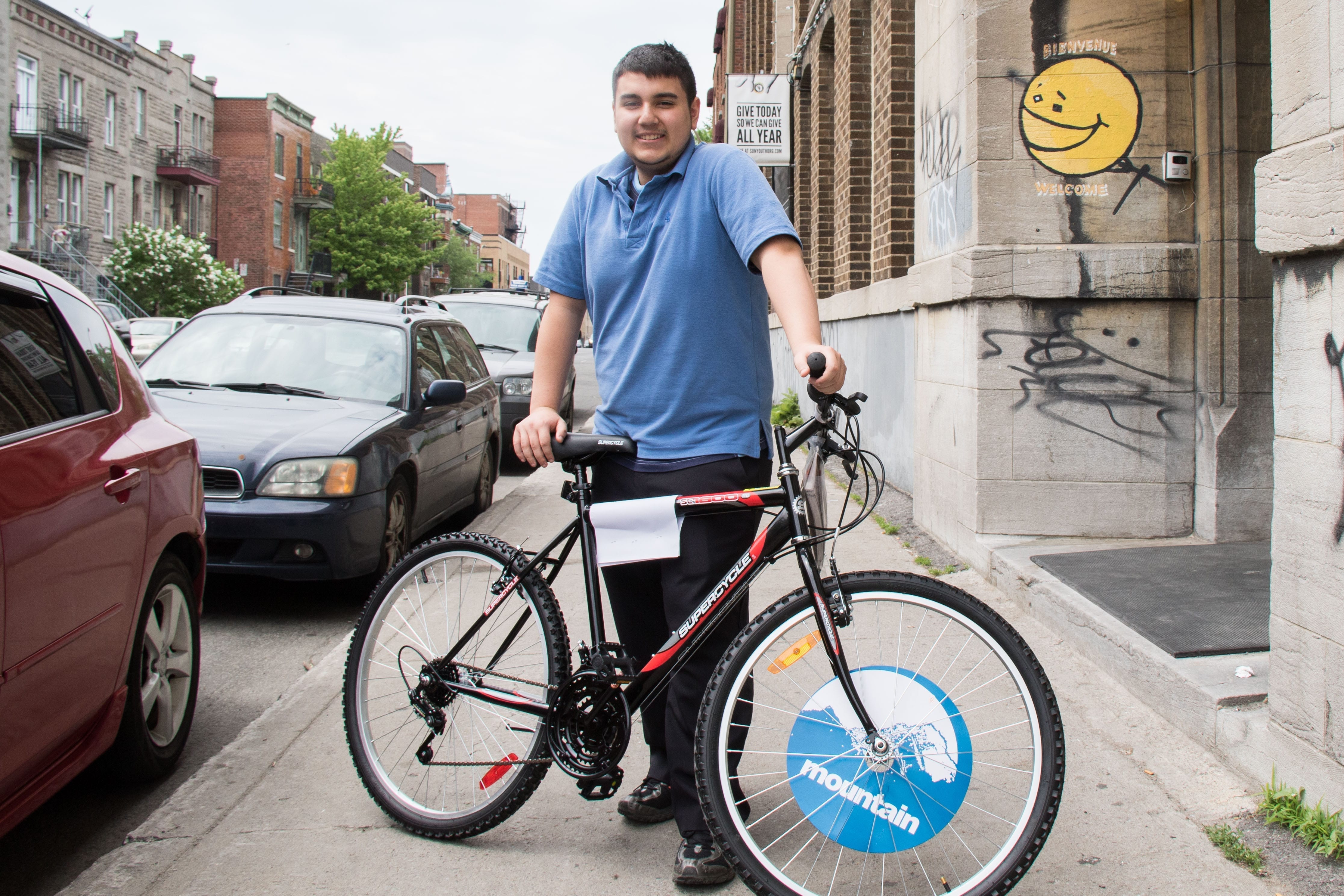 Over one hundred amazing youngsters whose courage and behaviour had a positive impact in their community were rewarded on Wednesday May 25th at Sun Youth’s 32nd Annual Bike Distribution. New bicycles are distributed to young people whose actions have had a positive influence or who have shown exceptional courage in difficult situations.

In 2014, while on his school lunch break with a classmate, Fernando, saw a man strike a woman and attempt to force her into a car. Without hesitation Fernando ran to help the woman, unfortunately he was not able to stop the man who was bigger and stronger. Instead, he immediately alerted the autho

rities with all the information concerning the vehicle as well as the individual. The police arrested the man within 15 minutes and the woman was saved. The man was found to have a history of extensive violence against women. Fernando’s family and friends are very proud of Fernando and the heroic quality he exhibited that day. Fernando whom had his heart set on participating in the bike tour of Montreal this year will be able to participate thanks to the generosity of Mr. Bike Man. Congratulations Fernando!

Jefferson, 16, is in secondary 3. He is punctual, hardworking, generous and stands out as a leader, with much improved classroom behaviour in recent years. Earlier this year, a new student who arrived in the group is subject to regular anxiety attacks. When this occurs, the student must be accompanied out of c

lass to a first responder which Jefferson has done more than once. Also on another occasion, Jefferson stepped in to help a special education teacher put an end to a fight between two students in his class. Once the conflict was over, he asked the teacher if she was ok and made sure she was not hurt. Jefferson is a boy who takes care of the people around him spontaneously and is actively involved in resolving issues. Congratulations Jefferson!

The police officer Catherine Guay of PDQ 44 submitted 13 year old Zackael’s candidature to emphasize his gesture. Zackael showed great composure when he came to the aid of a man who had fallen on the street in front of his home. Seeing the man was injured and bleeding, Zackael ran to find tissue to stop the bleeding, while other bystanders flocked to help him. Thanks to the quick response of everyoneand specially young Zackael, the man’s life, which was in cardiac arrest, was saved. Congratulations Zackael!

Jeremy, 17, is a deaf student attending the Lucien-Pagé school and is currently in pre-work training. During a fire alarm triggered last January, the entire school had to evacuate urgently in -20 degree Celsius weather. In the chaos of the evacuation, amidst the 1200 students, Jeremy took two students, one deaf with autism, under his care and directed them through the snow to shelter, reassuring them that the school leaders would soon regain control. Following this intervention, which was trying for all, Jeremy spoke at length of citizenship and of a sense of duty to help the poor. Congratulations Jérémy!

5 year old Ilyas and his 8 year old brother Marwan agreed to share their rooms and their toys with two Syrian refugees. They treat them like family, bringing them to the park to teach them to skate and helping them learn French by reading to them a different story every night.

Eliote, 11, donated $ 100 to an organization of humanitarian assistance in Ivory Coast. His gesture has inspired other children, from Quebec to British Columbia, to follow his example with its resulting positive effect. With his donation, Eliote enables Ivoirian children to attend school and learn. Congratulations Eliote!

Each year, Sun Youth gives out between 70 to 100 new bicycles, helmets and locks to these extraordinary young people. This year Sun Youth handed out 109 bikes, the most since the program was created in 1984. The creation of the program for the distribution of new bicycles has been made possible thanks to an anonymous donor known as, “Mr. Bike Man”.

Sun Youth’s Bike Committee received over 300 applications, many of which told wonderful stories about outstanding youths. Amongst these, 109 deserving young people were selected and rewarded with a new bike, a safety helmet and a bicycle lock. Whether they saved the lives of other people, overcame disabilities, sickness or other difficulties, helped others through volunteer work, prevented bullying, or even organized fundraisers, these young ambassadors stand as an example for their generation.

Some of the stories Sun Youth received in the application process were too amazing to be kept a secret. They all are a perfect example of why the program exists.