Sun Youth’s Bike Man Is No More but His Legacy Lives On!

Sun Youth’s Bike Man Is No More but His Legacy Lives On!

It is with great sadness that Sun Youth learned of the passing of dear friend and great supporter Avi Morrow on January 5th at 93 years of age. Since 1984, he was known to the public as the Bike Man, the anonymous donor who allowed the organization to reward deserving youths with brand new bicycles, locks and safety helmets. Over 1500 youngsters were rewarded in that fashion over the last 35 years. His generosity towards Sun Youth didn’t stop there: in addition to being responsible for the Bike Giveaway, he also contributed to the reward program for missing children and the purchase of life jackets for the Day Camp children, just to name a few initiatives he funded.

Executive Vice-President Sid Stevens remembers fondly the man who, 70 years ago, founded Avmor, the manufacturer of industrial cleaning and maintenance products, also responsible for many of the electric hand-dryers found in public washrooms. “We first met him when he turned 60 years old. He invited us to his office. He wanted to celebrate his birthday in a different manner; he was tired of getting Rembrandts!”, remembers Sid Stevens. Although Avi Morrow made his fortune with Avmor, he came from a very modest upbringing. As a kid, his parents didn’t have the financial means to buy him a bicycle, but after much begging they gave in and bought him his first bicycle, a real pride and joy for him. He would never forget that first bicycle and the happiness it brought him. He wanted underprivileged children such as he had been to experience the same joy.

In that spirit he contacted Sun Youth and the Annual Bike Giveaway was thus born. Every year since 1984, the Bike Man has allowed Sun Youth to reward deserving children with a brand new bicycle, lock and safety helmet but he never sought recognition. “He was so proud when he saw news footage of the children being honoured and their picture in the paper”, says Sid Stevens. “It was never about him. The important thing was that the youth would get the publicity. For him it was all about giving, not necessarily about getting accolades.”

Sadly, the Bike Man is no more but his legacy lives on through Sun Youth and the many other causes he supported. Before his passing, Avi Morrow made arrangements so that the Annual Bike Giveaway would continue for years to come and the family confirmed the initiative would carry on in his honour. An announcement will be made in the following weeks to call on the public for young deserving candidates.

Avi Morrow was laid to rest at Shaar Hashomayim cemetery on January 7th. The Board of Directors, Management, staff and volunteers of Sun Youth would like to offer their most sincere condolences to his his family, friends and relatives. May he rest in peace. In his honour, the family asks that donations be made to Sun Youth Organization. 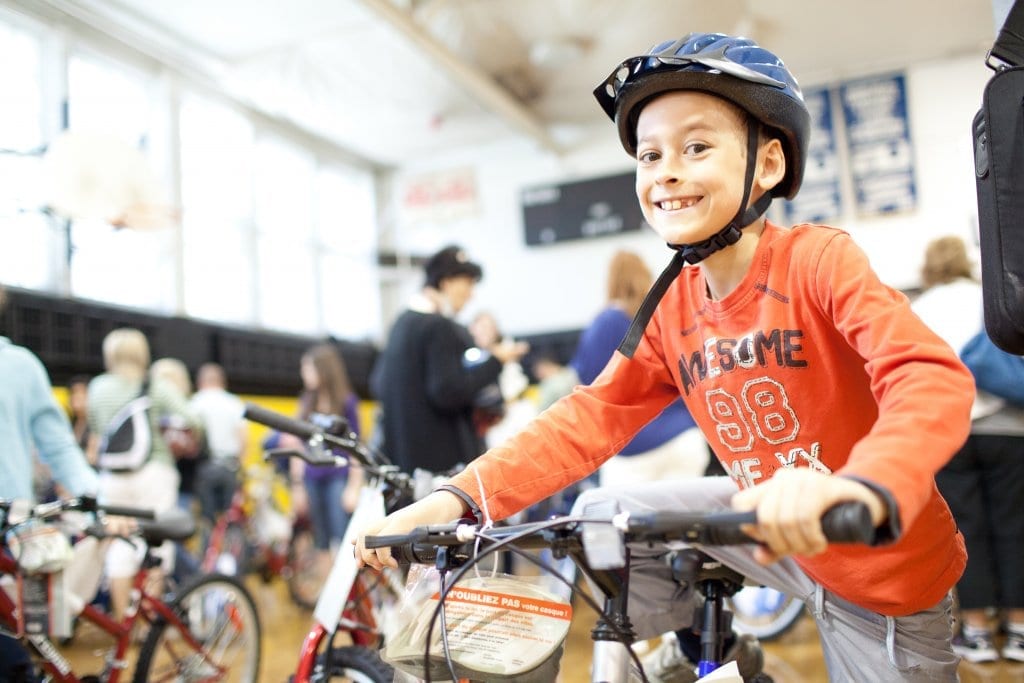 One of the 1500+ youngsters who benefited from the Bike Man’s generosity by being rewarded with a brand new set of wheels, bike lock and safety helmet. Photo: Elizabeth Delage.