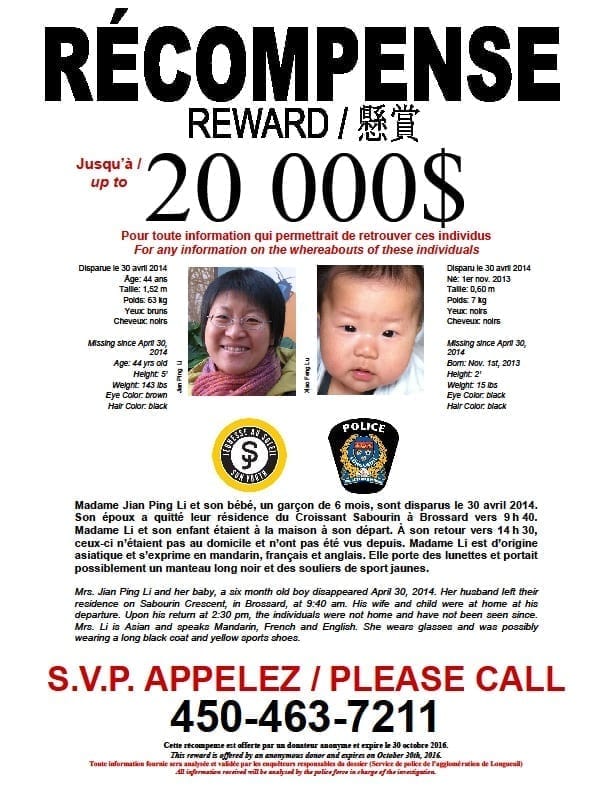 The Police relaunches the investigation!

The Police relaunches the investigation!

A $20,000 reward is offered to anyone with information on the disappearance of Jian Ping Li.

The Longueuil Agglomeration Police Service (SPAL) are relaunching their investigation into the disappearance of Jian Ping Li and her son, Xiao Feng Lu. Therefore, a $20,000 reward is offered through Sun Youth Organization to anyone with information on their whereabouts.

Mrs. Jian Ping Li, 42, and her infant son, were last seen on April 30th, 2014. According to the investigators of Longueuil police, her husband left their residence on Sabourin Crescent, in Brossard, in the morning. Upon his return in the afternoon, the mother and child were not home and have not been seen since. The reward terminates on April 30th 2017.

The Longueuil Agglomeration Police Service released new evidence last January 12th. You can find  some elements of the press release issued by the SPAL below. For a detailed recap of the facts, please consult their web site

If you see Jian Ping Li or her son, please call 911. The police is asking everyone to step forward and reminds them that the information they provide will be treated as confidential. Anyone with information on the whereabouts of these individuals, please call Longueuil police at 450 463-7211.

Created in 1991, Sun Youth’s rewards program carries on thanks to a steady partnership with the City of Montreal Police Department (SPVM). Since then, other police forces have joined this Sun Youth’s program: the Quebec Provincial Police in 2009 (Sûreté du Québec), the City of Laval Police Department in 2011, the Longueuil Police Department in 2012 and the OPP (Ontario Provincial Police) in 2014. In 2015, Sun Youth signed an agreement with its 6th police force, the Service de police de la Ville de Québec (SPVQ). Since 1991, Sun Youth’s rewards program has helped solve 26 criminal investigations and cases of missing persons corresponding to 27% of all investigations for which a cash reward was offered. As of January 1st, 2016, the rewards granted amounted to $100,000.

To know which rewards are still active, click here.