In July 1996, Saguenay-Lac-Saint-Jean was hit by an unprecedented natural disaster. The monster floods then destroyed everything in their path: dams, roads, shops and houses. Years later, the flood remains a historical event still well anchored in the collective memory.

During the first hours of the disaster, Sun Youth was called upon to bring material support to the victims. A major citizen mobilization ensured that, in an unprecedented outpouring of generosity, thousands of people wanted to donate clothing, household and hygiene products to help those affected by the disaster. A resource was needed to redistribute these goods to the people who needed them. In collaboration with the Saint-Vincent-de-Paul Society, Sun Youth representatives went to Chicoutimi to coordinate the distribution to the disaster victims. A year and a half later, history would repeat itself with the Ice Storm but that’s a story for another time! 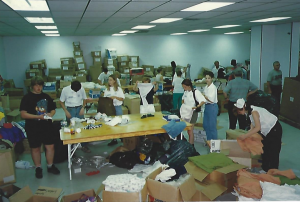 Back to timeline page
Next article
Previous article